A new intensity of driving light

Filled with features, Intensity Solis driving lights are now available in two great sizes, with a 9-inch (36 LED) and 7-inch (21 LED) option. Both sizes have an option for either a Spot or Flood beam, and all lights come with interchangeable red and black die-cast side bezels. New to the Intensity range is the Solis’ 5-stage dimmability function, while the introduction of a highly tuned single-piece reflector and high-powered OSRAM LEDs bring the Intensity Solis range to the top of the class in light output.

Not just a remarkable performer, Intensity Solis driving lights represent a value proposition that is worth considering if you’re looking to add some additional driving lights to your vehicle. 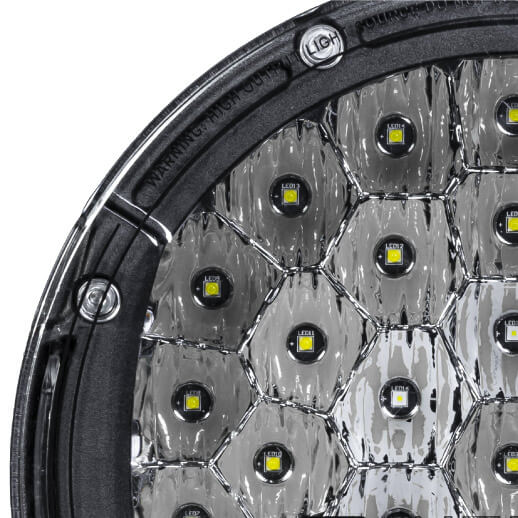 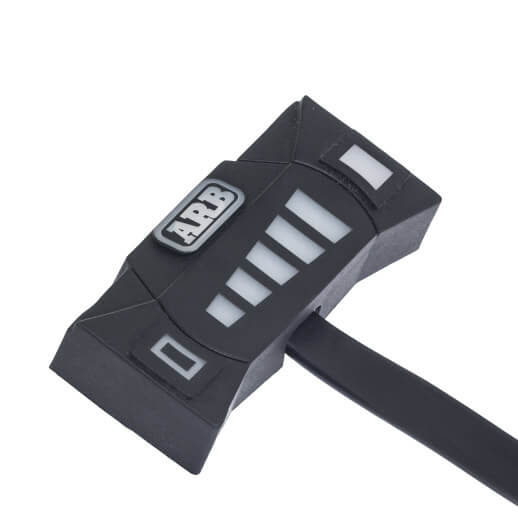 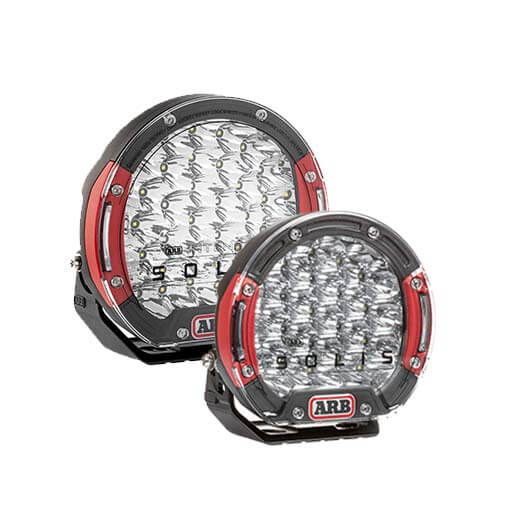 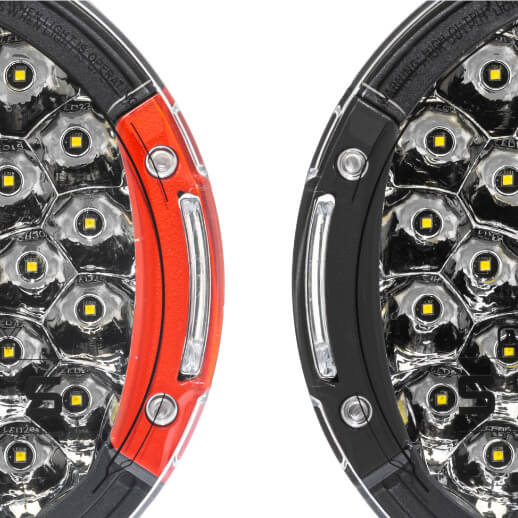 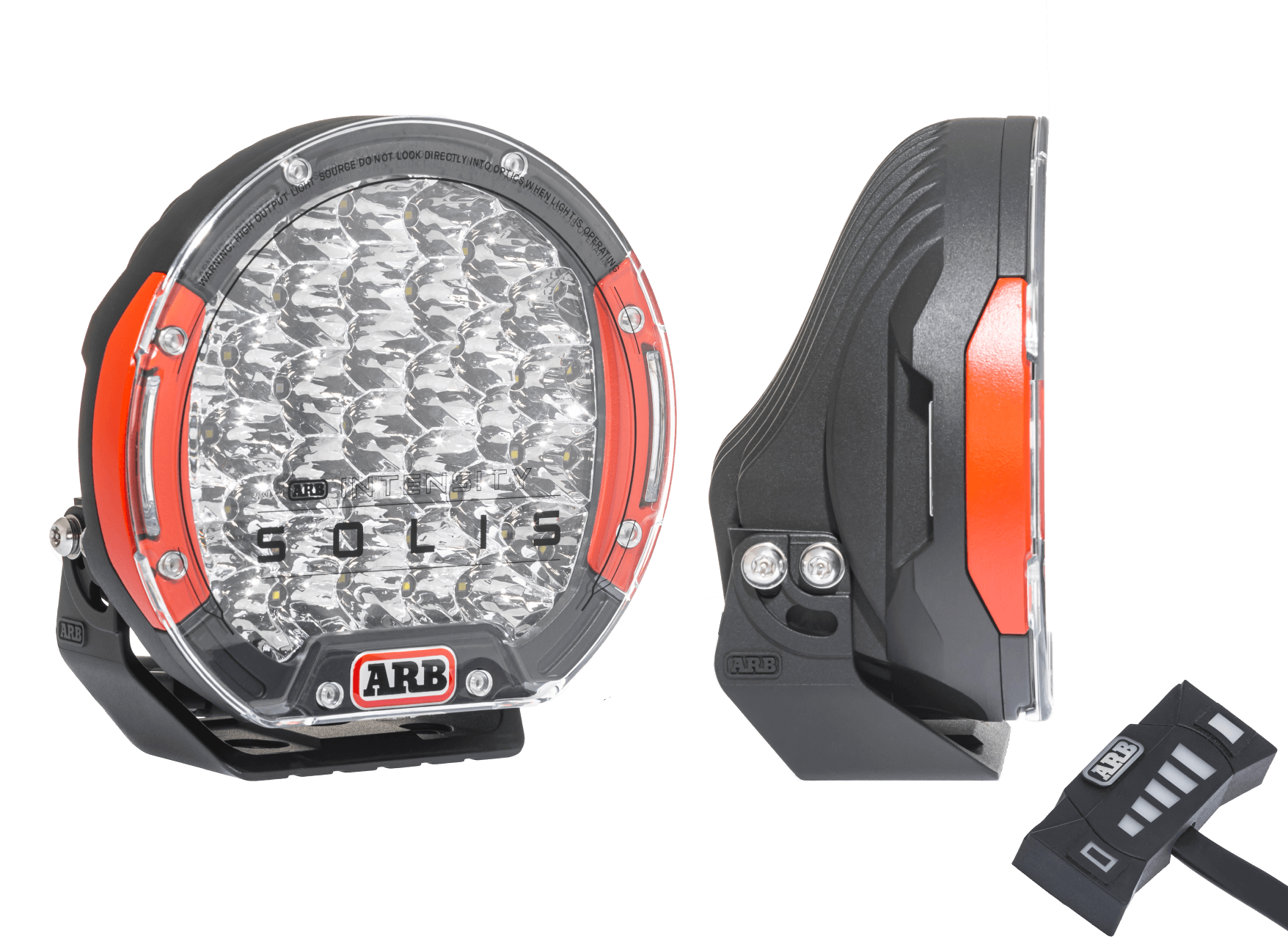 Submersible up to 3 metres, 3 pinning holes on bracket.

Cooling is maximised via the die-case aluminium body, allowing the efficient dissipation fo heat from the light housing. Intelligent active thermal management of the electronics keeps the lights running at their peak performance.

5 preset output settings allow you to alter the intensity of your intensitys!

For durability, protection and tactile feel.

Interchangeable red and black cast aluminium side bezels give you the choice of running a red highlight or keeping the lights all black!

The Intensity Solis range is available in dedicated spot and dedicated flood variations which connect to a centralised dimming controller in the wiring loom. 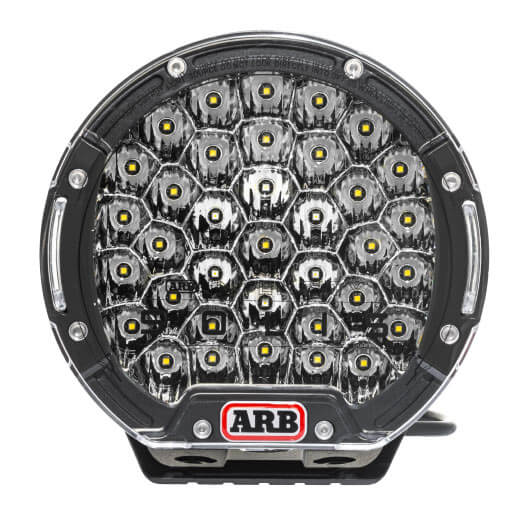 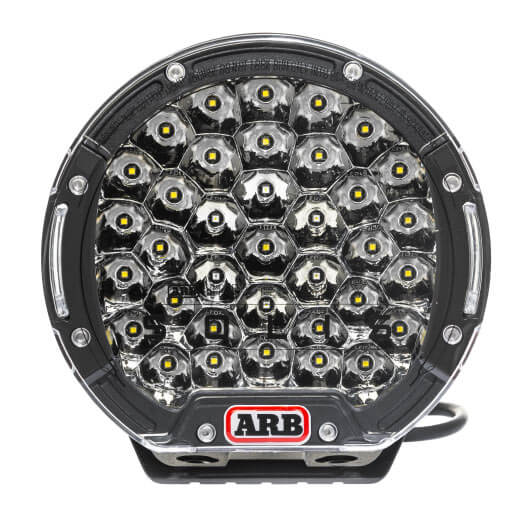 Spot, Flood or a Combination?

How you set up your driving lights should reflect the type of driving and terrain you are driving in.

In areas of wide open land and fast roads such as Outback Queensland, New South Wales and the Northern Territory, a set-up of two spot lights will give you the best throw of light reaching as far down those long straight roads as possible.

For drivers who are predominantly in heavy bush with lots of winding roads such as the Victorian High Country, a set-up of two flood lights will fill the foreground, giving you great visibility to the side of the roads where roos like to hide and throught he next close corner.

For most drivers, however, the combination of one spot (driver’s side) and one flood provides the best of both worlds. The single spot throws a strong direct beam down the road over 1km, while the flood beam fills the foreground and roadside what is often considered the optimal driving light pattern and output.

Read more about deciding on the right light set-up

Ready to add 5 stage dimmability, a highly tuned single-piece reflector and high-powered OSRAM LED performance to your vehicle’s lighting set-up?
The first step when it comes to finding out more about Intensity Solis driving lights is a trip to your local ARB store. 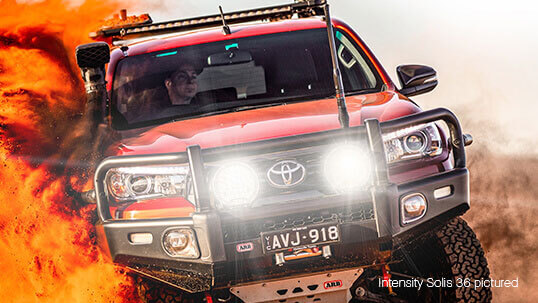 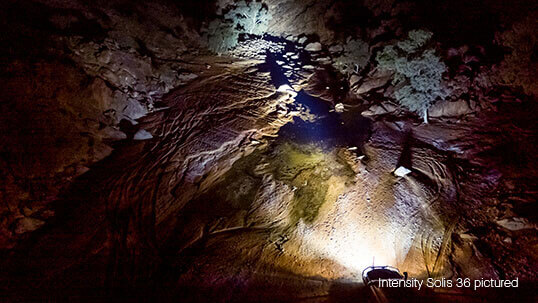 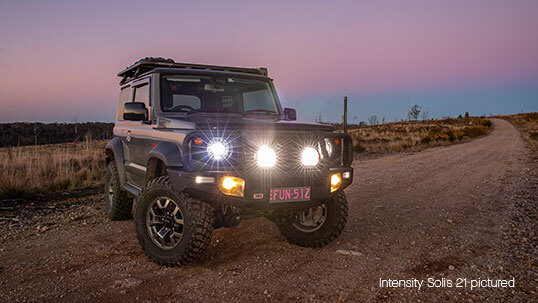 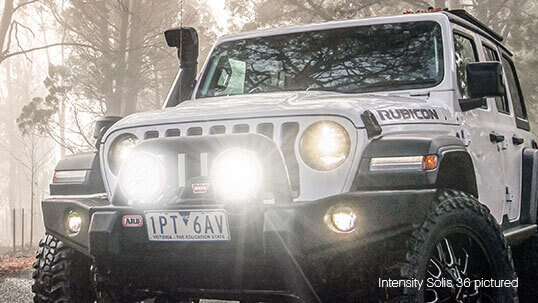 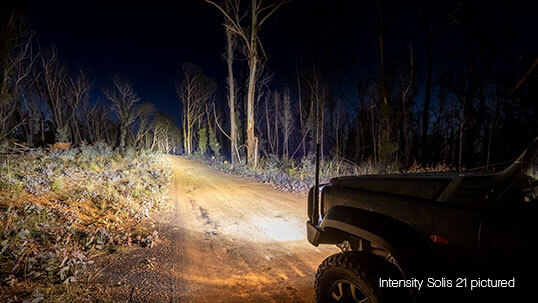 With an impressive array of LEDs and a highly tuned reflector design the Intensity Solis has been brought to the top of the class in light output.

The larger Intensity Solis 36 contains a combination of 6x 10 watt and 30x 4 watt OSRAM LEDs, and when measured as a pair of spot beams, the Solis 36 boasts 1 lux @ 1462 metres. Individually, a single flood beam will achieve 1 lux @ 729 metres while one spot beam has an impressive 1032 metres throw.

Packing a significant punch for their size, the Intensity Solis 21 possess a combination of 6 x 5 watt and 15 x 4 watt OSRAM LEDs, and when measured as a pair of spot beams, the Solis 21 boasts 1 lux @ 1181 metres. Individually, a single flood beam will achieve 1 lux @ 620 metres while one spot beam has an impressive 835 metres @ 1 Lux.

Lights this bright need some level of containment, which is why Intensity Solis lights are sold standard with a 5-stage dimmability switch. The ability to dim driving lights is perfect for when you’re approaching highly reflective road signs and is also really effective in low visibility scenarios (such as dust). 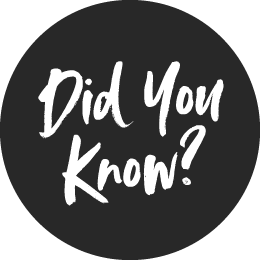 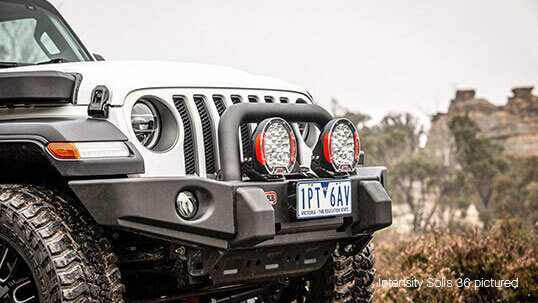 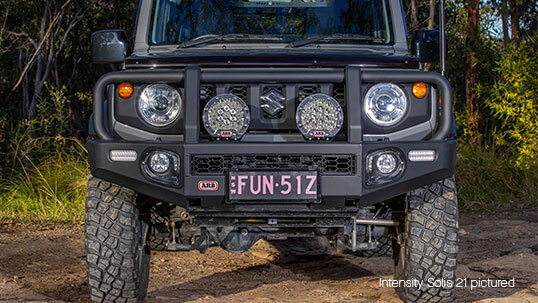 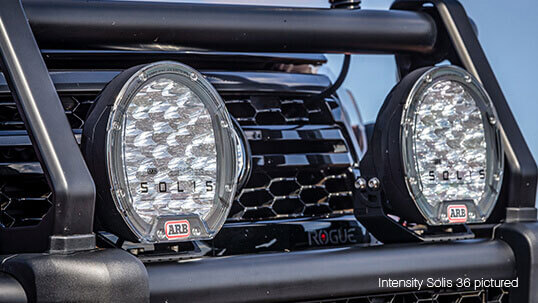 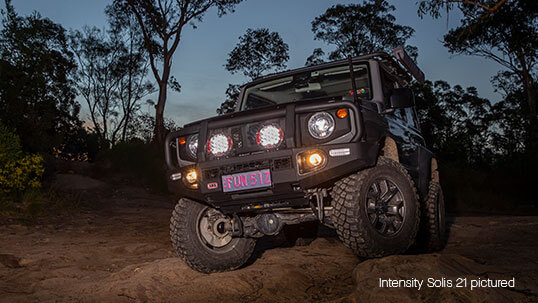 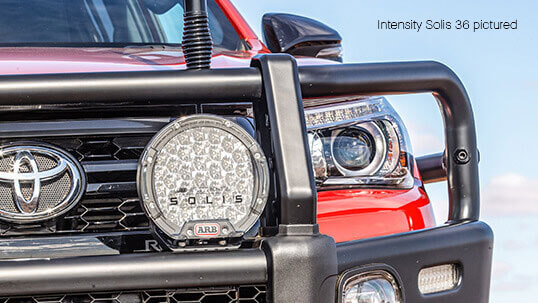 While the Solis’ light output figures are impressive, what the light really offers the driver is so much greater!

The ultimate goal when designing a driving light is to get two light patterns, one spot and one flood, that offer light where you actually need it. To be most effective, a driving light needs to light the areas of the road and surrounds that match the terrain and driving style. Your driving lights need to be effective either as a matching pair (of spots or floods) or as a combination (one spot and one flood). Creating a light pattern that shines the furthest doesn’t always mean the light is useable – let alone optimal.

Driving lights need to have good central light and shouldn’t have harsh edges, but rather a good feathering of light that bleeds off. Additionally, the light should not be too white as it can cause additional eye strain for the driver, nor should the light throw too much intensity onto the foreground directly in front of the vehicle.

ARB Intensity Driving lights (V2 and Solis) are tuned to provide the optimum offering to suit the above criteria. 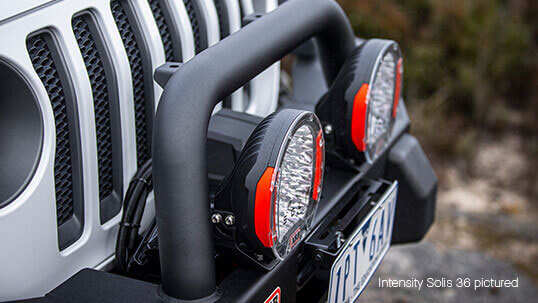 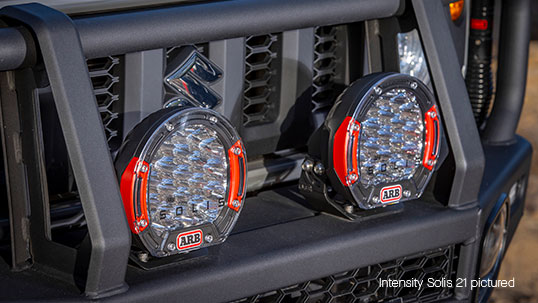 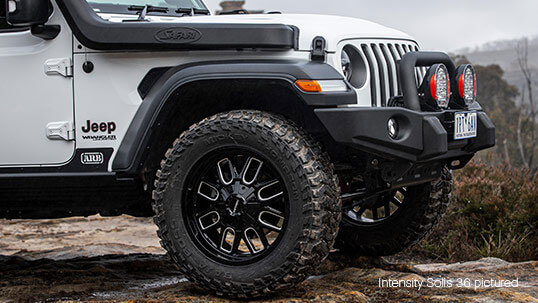 The squat shape of the new light better suits bull bar pan mounting and helps with lowering the centre of gravity of the lights, making them more stable with less oscillation and vibrating which puts less stress on light and bull bar mounting components (including tabs where applicable).

The Solis light is mounted in an all black, vertical-pivoting adjustable, cast aluminium cradle.

Looking at the side profile, ARB engineers have shaped the heat sink casting with a narrower section at the top of the light and a wider section towards the base. The result? A large light which fits a wide variety of applications with more room to fit in front of big tubes, like what is used on ARB Summit Sahara bull bars.

Whether you prefer complete black-out, amber or clear – there’s a range of cover colours to choose from to protect your Intensity Solis lights! 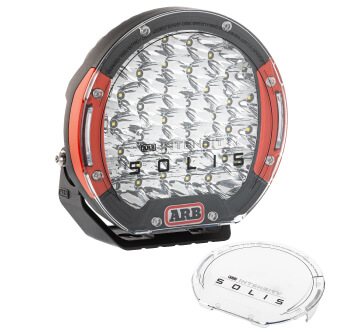 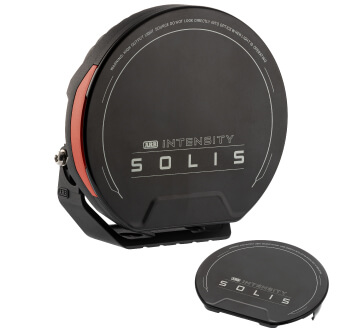 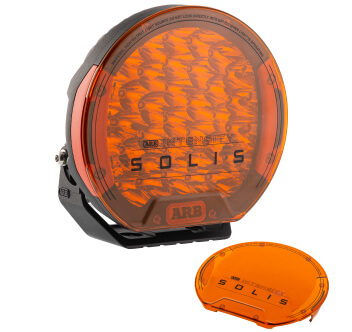