“Driving the Ice Road in Canada’s far north is one of the world’s great motoring adventures.”

‘You guys have been watching too much of the Discovery Channel!’ This came from the smiling Canadian Customs official when we gave him our answer to what we were doing in his country for our holiday.

We planned to drive one of the fabled ice roads, and much of the allure of these routes across the ice and snow covered wilderness of the Arctic had indeed been fuelled by the reality TV show, Ice Road Truckers. It’s a show that sees truckies hauling huge loads north over temperamental ice roads where every step or turn of the wheel is seemingly fraught with danger. Luckily for them (and us) the truth is not nearly as dangerous, but you never let the truth get in the way of a good story.

From Whitehorse, the capital of Canada’s Yukon, we picked up our vehicles (shod with Cooper STT tyres) and safety survival gear and then headed north on the main Klondike Highway, which winds its way north through sensational mountain, lake and river country. Small hamlets containing little more than a roadhouse offer the winter traveller a chance to fuel up with petrol and hot coffee. In places the road travels beside or crosses the mighty Yukon River and some of its major tributaries – all at this time of the year frozen into static white displays of ice more than 50cm thick.

We easily drove the 535km between Whitehorse and the northern frontier town of Dawson City, but with the temperature dropping to a cool -15°C along with just a touch of wind chill, we deemed it smart to run from the cars to the hotel bar and rooms.

Next morning, after watching the start of the Percy de Wolfe dog sled race (check out www.thepercy.com for details), we waved goodbye to Dawson and turned onto the normally gravel Dempster Highway for the long drive north to the remote Eagle Plains roadhouse and then the small First Nation settlement of Inuvik, nearly 800km from Dawson. 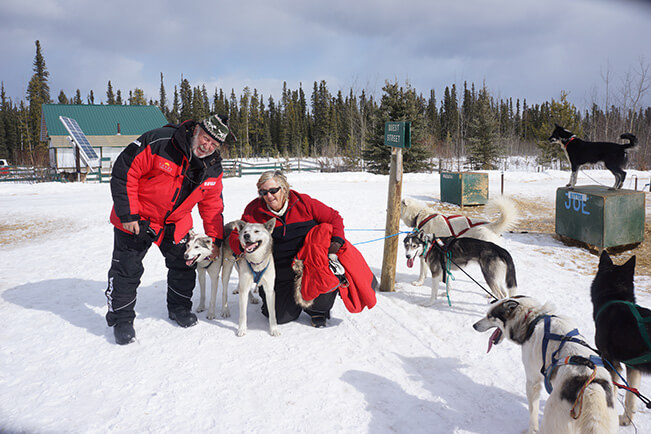 “The route gets blasted by the gale force winds and blizzards that howl across the tundra.”

The Dempster is the only road in Canada that crosses the Arctic Circle. Kept open during winter through consistent hard work by road crews, the route gets blasted by the gale force winds and blizzards that howl across the tundra. Regularly too dangerous to drive, the route gets closed, often north of Eagle Plains where everyone is then forced to stop.

Further on and 300 unforgettable and eye catching kilometres later, the road climbs a long hill to the crest of the Eagle Plains, and a short distance later you come to the only facilities along the route – the roadhouse of the same name and our overnight stop.

That night the Aurora Borealis, or Northern Lights, put on a grand display for us, made even better by the limited amount of ambient light around the roadhouse. The only difficult trick, as I was to find, was to take a photograph of these dancing, pulsing ephemeral waves of coloured light while standing in -25°C temperatures!

From Eagle Plains our route dropped down into the Eagle River valley and soon came to the Arctic Circle, where every first time visitor has to stop. From here the route crosses some bare windblown tundra, which the locals call ‘Hurricane Alley’, before climbing to another high crest where you cross the border into Canada’s Northwest Territories. 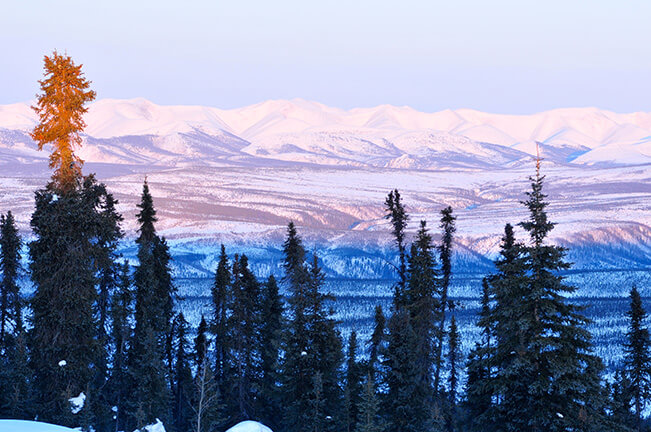 Winding through the superlative surroundings of the Richardson Ranges for the next 50km, the route then descended to the Peel River crossing and the small community of Fort McPherson before pushing on to the major community of Inuvik on the eastern edge of the Mackenzie River. The Mackenzie is the longest and largest river in Canada, the largest river flowing into the Arctic Ocean in North America and, with its tributaries, one of the longest rivers in the world.

The next day we took the road out of Inuvik and drove down onto the frozen crust of the Mackenzie and turned north. It was as simple as that… no fanfare, just a road sign pointing in the direction we had to go. Our destination was the small community of Tuktoyaktuk (or more simply just ‘Tuk’) 185km away on the edge of the Arctic Ocean.

For most of the way the route sticks to the Eastern Channel of the river, its summer shipping lanes marked by navigation beacons that stand above the shallow marshes and mudflats that sprawl across the delta. In winter, the Channel is just one continuous expanse of snow and ice. We passed isolated log cabins, a deserted village where reindeer had first been introduced into Canada, and then an old military ‘ICBM early warning’ base, its supposed defensive benefits now superseded by satellites and anti-missile systems.

As we came into the river’s delta, the only high point we could see anywhere were the ‘pingos’ which are small ice and earth formed hills that are only found in the Arctic. Our destination, Tuk, has one of the highest concentrations of these strange geological formations in the world, with over 1,350 pingos dotting the forbidding terrain.

For the last 35km to Tuk, we slipped out onto the Arctic Ocean, the ice below our wheels becoming the deeper blue of a clear sea. It was an unreal experience and we stopped a number of times to check the thickness of the ice and to revel in this wild and unbelievable landscape (or should I say seascape).

During our time in the Arctic we visited a couple of isolated communities accessible only by the ice road through the Mackenzie delta. Being spring, the locals were in a party and sporting mood and we caught the first of the festivals up there – the Mad Trappers Rendezvous at Aklavic, which was a lot of fun.

All too soon we had to head south, the road and weather having deteriorated since our northward journey but the cars behaved faultlessly, and it was an easy run back to Dawson and then to Whitehorse. Our Arctic ice road adventure was over but it will be a long time before any of us forget it! 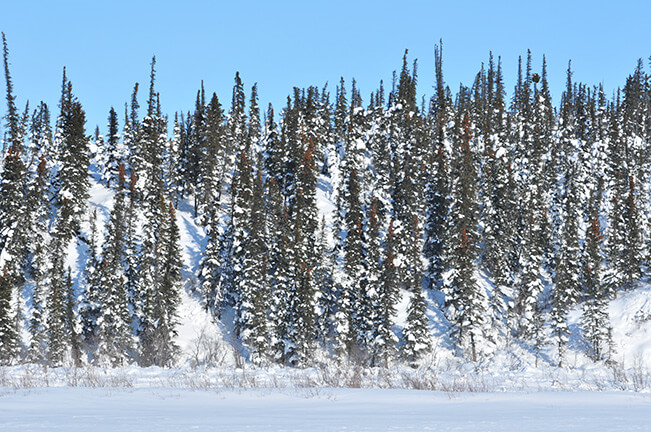 The Ice Road we drove to Tuk is due to be replaced with an all-weather gravel road in the next two years. While there are other ‘ice roads’ in Canada and next door in Alaska, this is the only one north of the Arctic Circle; it is the only one that crosses a section of the Arctic Ocean… and is open to the public. It is by far the best road to experience. If you want to drive it, get in soon!

Whitehorse is easily reached by air from Vancouver. See: www.visitwhitehorse.ca

March and early April are by far the best times to go to drive the Ice Roads. For the best road info, go to www.dot.gov.nt.ca and search for ‘Road Conditions’.

Whitehorse is really the only place you can hire vehicles and cold weather survival gear for such a trip. There are a number of providers in town and for our Chevy vehicles we used the very professional Driving Force (www.drivingforce.ca).

There’s a good choice of accommodation in Whitehorse but elsewhere it is limited or near non-existent during winter. For Dawson visit www.dawsoncity.ca and Inuvik visit www.inuvik.ca.

A number of operations can provide a range of adventure activities in the Yukon or the Northwest Territories. Check out Up North Tours (www.upnorthtours.ca), based in Inuvik – we found them most helpful.